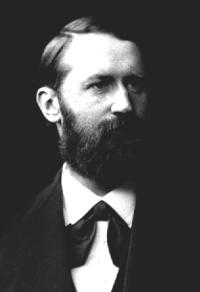 Born and educated in Göttingen, Arthur Auwers began his career at Königsberg, Germany [now Kaliningrad, Russia], where he learned to use the heliometer and earned his doctorate. He served as secretary of the Berlin Academy from 1866 to 1915. During this period he made trips to Patagonia to observe the transit of Venus and to the Cape of Good Hope to assist with the observations of David Gill. Auwers’s life work was making extremely precise catalogs of stellar positions and motions. He made completely new reductions of James Bradley’s 18th century Greenwich observations and began a project of unifying all of the world’s catalogs from 1750 on, a task not completed until 1966. He computed the orbits of the Sirius and Procyon systems before the faint companions to the bright stars were seen, and he redetermined the distance to the sun several times, making use of transits of Venus and an approach of a minor planet. Not averse to the new astronomy, he helped found the Potsdam Astrophysical Observatory.

Search ADS for works about Auwers