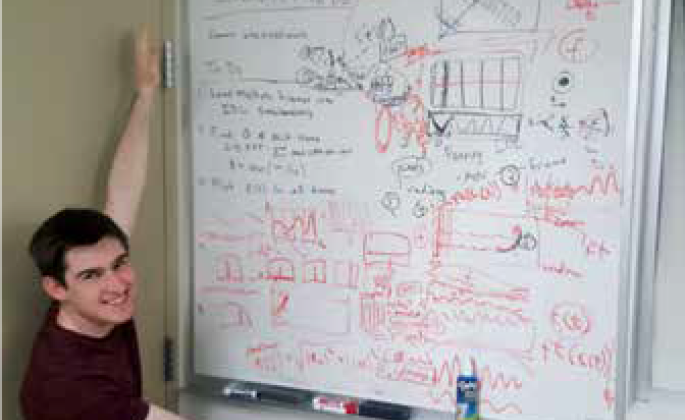 This project is a continuation from my Fall 2018 project, Constructing LIGO, where I built, calibrated, and tested my own interferometer. This portion of the project was primarily software-based, as I developed code to take a video, split that video into several thousand frames, and then run calculations based on those frames to measure a signal that simulated LIGO’s historic detection.

The computer language I used is called IDL, or Interactive Data Language. This computer language is primarily built for astronomers, who take images and manipulate them into different forms of data. Due to the nature of IDL, I was able to generate a similar process for my work.

LIGO’s chirp has two primary components, an exponential frequency change over time, coupled with an amplitude increase over that same timeframe. The data suggests that as the frequency increases, the amplitude of that wave also increases. With this in mind, I needed to insert a signal into my interferometer that would generate that same data set.

In order to insert a specific signal, I needed to make adjustments to my interferometric setup. First, I changed out a gear system for a speaker, which would insert a sound wave through a wooden block and into the mirror. With the speaker in place, I tested a variety of function generators. I eventually came upon an online frequency generator and sweep generator capable of adjusting the frequency and the amplitude of a wave simultaneously. Once I found the sweep generator, I knew I could generate a signal similar to that LIGO detected.

At the end of the semester, I was able to run my experiment, and measure a simulated LIGO chirp. This project now can serve as a foundational testbed for other students. Students in the future can take the research I conducted and manipulate the project for other means, while still keeping to the core product. This experiment can be taught to students in an optics lab, where the students could learn valuable lessons in interferometry and its use to make measurements. The greater community could view this experiment to understand how LIGO works, from start to finish.